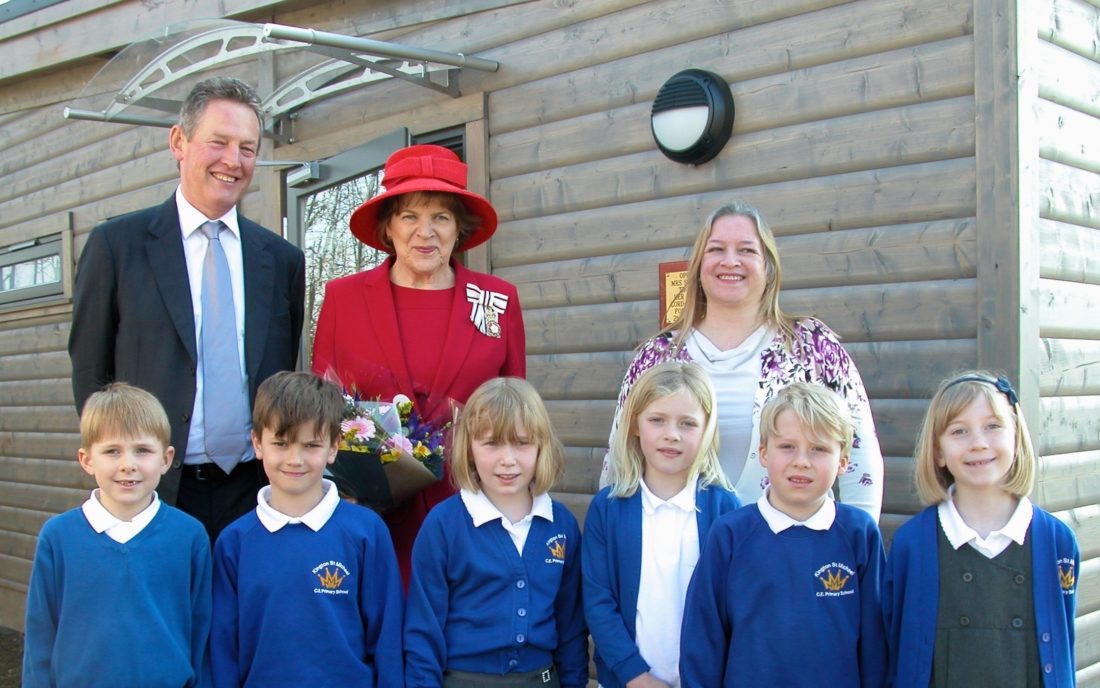 PUPILS at Kington St Michael CE Primary School near Chippenham have become the first in the country to take their seats in a new style of modern classroom made by Norwegian Log Buildings.

The brand new Norwegian Log Contemporary building was made and built off site at Norwegian Log’s Berkshire manufacturing base in four modular sections. Erected in just two days on the school grounds and so causing minimal disruption to staff and pupils, it boasts a fully-fitted 45m2 classroom, lobby and two toilets and is now home to the school’s Year 2 and 3 class.

In a special opening ceremony at the school, Her Majesty’s Lord-Lieutenant for Wiltshire Mrs Sarah Rose Troughton unveiled the new log cabin classroom in front of pupils, staff, parents and governors. Pupils recited a poem written about the new building:

Thank you for our classroom!

A place to grow,
A place to play,
Bright and warm,
Every day,
It’s fresh and piney,
New and shiny,
A home to us at school,

The striking solid log building is the first classroom to be made by Norwegian Log as part of its contemporary range. Using traditional log construction methods, gleaned over 30 years, the firm is branching out into providing much larger transportable buildings – all with a modern design twist but with the same durability, acoustics and natural thermal insulation.

Finished in a natural silver hue with large roof lights and windows, the Wiltshire classroom is flooded with natural light and sits on the edge of the school’s grounds.

“We wanted a building that would fit in to the school at the end of our field and look in keeping with the rural surroundings. We also wanted it to be smart, not like an old-fashioned mobile classroom, and to be a permanent fixture that would last.”
Tracy Cornelius - Head teacher

The new building has proved a hit with pupils. “The children love it. It has a fantastic atmosphere, a really nice learning environment and the pupils appreciate how lucky they are to have it,” she added. It has also solved a space issue at the over-subscribed school, rated Outstanding by Ofsted, which has grown rapidly from 76 pupils just eight years ago to 120 currently. “We’ll now be able to redevelop other areas of our school into a music room and library so the building is helping not just one class but the whole school,” Tracy said.

Managing Director Nick Forrester said: “We’re delighted Kington St Michael’s pupils have given their new classroom the thumbs up. Tracy and her team wanted a classroom building that looks good and would last and we’ve delivered exactly that,” he said.

And in the words of one pupil, who wrote about the new classroom in a school project: “It’s lovely inside. The Norwegian logs smell fresh and there’s lots of space. The huge windows make it bright.”